Merry Christmas! Happy Holidays! Are your tummies stuffed? Are your wish fulfilled? Can you make December’s rent? Probably not, but that’s okay! I’ll help you with all of that(okay… maybe not paying rent) with my end-of-the-year awards! I know, I know, you’ve seen these all other the interwebs–judging that artist, this artist, that genre, this genre. But whatever, what’s one more! From this point on, you’re under a spell! 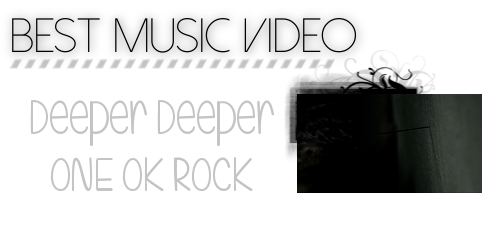 I stumbled upon this video by pure chance. It has won me over. The fact that I still don’t even know how to decipher this video proves to me that it refuses to be ignored. It’s dark and spooky, keeping you on your toes. Let’s not forget the sweeping emotion of nostalgia it gave me, my best friend, and my boyfriend. It reminded us so much of the prime time of the emo rock bands that we used to listen to back in middle school. The band themselves are totally comfortable in the video. Don’t you hate when rock bands look so out of place in their own setting? Not to mention, the lead singer is extremely entertaining to watch bounce around. The song is just the icing on this seriously fantastic rock cake. I’ll gladly be listening to more of these boys.

I wasn’t able to review this album this year. Regardless, it comes out on top. The song was filled was mentionable dance-tracks dedicated toward the sound versus the singing. Although Perfume is that perfect balance of techno and vocals, this album gleefully strolls down the road of any Perfume fan’s favorite era: GAME. That era was all techno. GAME was very edgy and strong, while LEVEL3 retains a whimsical, softer sound. I adore the fact that Perfume can bring back one of their beloved sounds and still make it sound modern and different. This album is close to flawless.

Ai Otsuka: a once top-charting artist that now struggles to even surpass 20,000 sales. I become frustrated to know that such a bright, young talent has just fallen from the spotlight. Otsuka’s latest single takes the number one spot for singles this year for the plain fact that it is beautiful. I was honestly very surprised when I first listened. It’s quite different for this artist that is known for their pop/borderline pop-rock songs. This brassy set of songs coupled with the deepest vocals I’ve ever heard by Otsuka are definitely unique. Each song has a refreshing new sound which builds anticipation for the next track. Hello me, one of the b-sides, is that light pop-rock feel that older J-pop fans are familiar with. Toilet Paper Blues is a perfect 70’s jazz band number that celebrates absolutely gorgeous vocals by the 20-something year-old. Really, don’t underestimate this single’s sale count.

e-girls is a collection of members from avex girl groups. Their songs are usually upbeat pop songs paired with a totally stunning music video and rocking dance. Being avex girl groups, you can bet that these girls have some serious skills. The song is nothing to bark at, however, the dance is to die for! I love skilled dancers as much as the next person, but what I love the most about this choreography it’s not all the same in each section you look at. I adore the group-focused and high-level energy that these girls put in. It’s very well done and fun to watch. The best choreography is the one that makes you want to dance along! 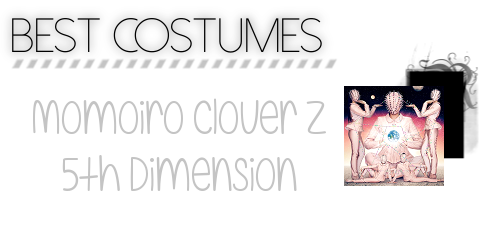 They’re weird. They’re quirky. They’re odd. They’re creepy. They’re everything that makes up an awesome costume. When I first saw MomoClo’s 5th DIMENSION outfits somewhere on Nia’s Wonderland, I was taken aback. They were freakin’ spooky! What the hell was I looking at!? Those flesh-colored, soft-plastic, spike-induced costumes were nothing to laugh at. They were awesome! Plus, if you laugh at them, MomoClo might just head-bunt you in one of those things! But seriously, these are the coolest, most creative pieces of art I’ve seen by a J-pop group in a long time. The fact that there are so many variations of the 5th DIMENSION costume adds to its originality. The costume designer went all right on this one! 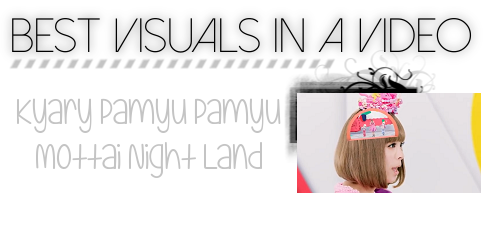 I was worried that Kyary might not have been able to make not even one spot in the awards, but thankfully, Mottai Night Land was there to save the day late in the year. All year long, Kyary has released super addicting music but doomed with less-than-par music videos. Sure, they were weird and “Kyary-like,” but they just didn’t… stand out. But finally! Something that doesn’t look like a 2-dimensional nightmare! So interest! Much visual! Very feel! It was actually entertaining to watch. And hey, now we all know how weird Kyary’s dreams are. But really, did we ever have any doubt?

You cannot deny Miliyah’s absolutely beautiful singing in this song. I love that she really takes control of this song despite m-flo’s powerful performance. I can’t help but to melt in this stunning song. It’s a gorgeous ballad that flawlessly incorporates Miliyah’s light, balanced vocals and m-flo’s catchy rapping. Truthfully, no other singer would have been able to pull this song off the same way Miliyah did.

Essentially one of the few J-pop groups that debuted this year, Juice=Juice really put in work. Whether we’re talking about their indies debut or major debut, JJ has put up a strong performance. These girls have really been able to work with the image that has been apparent in all of their releases: a rather mature and serious one. Finally, we can see Eggs/Kenshuusei being recognized.

I can’t pick one. I can’t choose. Some have done better than others, but nothing to particularly point out. Some had a good year, but a rather lame one compared to past years. Some were awesome and have always been awesome! And some did amazing this year… but it was the first year they debuted. I can’t do it!

Is TOKYO GIRLS’ STYLE’s music a little too much of a blast from the past? Does AKB48 have way too much cheesy pop for you? Then your best bet is 9nine. They are a perfect medium between the two previously mentioned group. I was honestly a little surprised by how much they’ve grown on me. Don’t mistake them for just another J-pop girl group, these girls actually have very strong presences. Their vocals are fantastic, their songs are catchy, and god, they’re styled so well. Check out one of my favorite songs by them by clicking the picture! Oh, and one of the members is the younger sister of Perfume’s A~chan!

If I hadn’t been ass out of Internet at the time of this announcement, you bet I would have written up a giant sob post dedicated to beloved AKB48 member. I was crushed by the announcement of Mariko’s graduation. All of us AKB fans expected Mariko-sama to stay with AKB48 until her death. I know, that isn’t realistic at all and no one really expected that to happen, but it’s always been a running gag. Mariko is literally one of the most flawless human beings I’ve ever laid eyes on–inside and out. She’s absolutely stunning, has a fantastic personality, and is an all-around joy to observe. Her smile could light up a room. Her departure from AKB48 has definitely caused a wall to go up when it comes to AKB.

Great. How in the hell did I spell Minegishi wrong? Sigh. Oh well. Anyway, if you don’t remember, you should. Minami Minegishi’s scandal, demotion, and head-shaven apology video caught the eyes of hundreds of news stands all over the world. It was something that made people question the sexism and legitimacy of the idol business. Some proposed that it should be banned altogether. So many were disgusted by this whole thing–myself included. It was a shocking, heartbreaking endeavor that actually still brings some tears to my eyes. Minegishi is a beautiful soul and I’m still so upset that she had to go through something this traumatic.

You had to have seen this one coming, right? Although Morning Musume hasn’t completely sold me, I’m still immensely proud of them for being able to go through this year on top. Sure, they aren’t selling millions, and sure, they aren’t going to Kouhaku, but MoMusu have pulled off three consecutive Oricon number ones and have been blowing up television shows. They’ve been working their asses off and there’s is absolutely no denying it. I hope that even with this silly name change, the girls continue to shock the fans and dance in every corner of Japan.

There have been quite a few posts criticizing Berryz’ lack of thunder in 2013. Many say they’re boring, they have no chemistry, and should probably just disband. Berryz are what introduced me to Hello! Project. They’re what has cemented my love for J-pop. Of course, I was pretty hurt to see that so many people thought that the group had gone to shit. But at the time, I kind of agreed. The group’s music was a little stale, there weren’t as many good promotions going on, and they’ve barely been in the news! I was ready to throw in the towel and jump on the “Bye to Berryz Koubou” bandwagon… Until I actually researched what they’ve done this year. Berryz have actually been able to break the 40,000 mark–something they haven’t done in a long time, if at all. Not to mention, they’ve been to Nippon Budoukan, a huge accomplishment for any artist. They’ve actually done really well this year–it just can’t be seen with Morning Musume overshadowing everything.